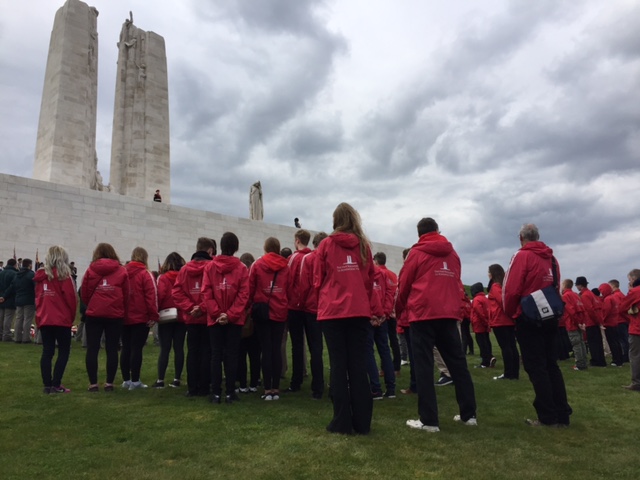 Today, at the Canadian National Vimy Memorial in Vimy, France, Veterans, Canadian Armed Forces members, international military representatives, dignitaries, Canadian and French citizens, and youth gathered to solemnly remember and honour the supreme effort and sacrifices of the Canadian soldiers who went into battle at Vimy Ridge on April 9, 1917.

Extensive preparation and planning were key to victory at the Battle of Vimy Ridge, where, for the first time, all four divisions of the Canadian Corps courageously worked together as one formation. Their triumph at Vimy and in the battles that followed contributed to a new and stronger sense of national identity, both for Canadians and on the international stage, earning Canada a separate signature on the Treaty of Versailles that officially ended the First World War.

At a reception following the ceremony, visitors and local dignitaries learned more about a new Visitor Education Centre currently being constructed at the Canadian National Vimy Memorial. The product of a Government of Canada partnership with the Vimy Foundation, the Centre will provide visitors to the national historic site with comprehensive and meaningful information about Canada’s contribution to the First World War, including the Battle of Vimy Ridge. The Centre is scheduled to open in April 2017.

“The Government of Canada remains committed to ensuring that the valiant sacrifices of Canadians at Vimy are remembered for generations to come.”

“We have a responsibility to remember and honour Canada’s fallen of the First World War on Vimy Ridge Day, and on all days. It was their commitment and sacrifice which helped give life to our identity as a nation. I am pleased that the Visitor Education Centre at the Canadian National Vimy Memorial will help showcase this defining moment in Canadian history. Through remembrance and education, we will keep this memory alive”

“The Vimy Foundation is proud to be a partner of the Government of Canada on this exciting project to build the Visitor Education Centre. This Centre is much needed and will help provide the necessary historical context for what visitors, especially youth, see throughout the Vimy site. We look forward to officially opening the Centre in conjunction with Vimy Centennial commemorative activities in April 2017.”