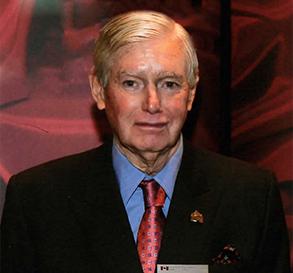 It is with great sadness that we announce the death of the Founder of the Vimy Foundation John Andrew Powell.

The accident of birth, his father said. He was fortunate in his choice of parents. Brought up in Westmount, he attended Selwyn House School, Trinity College School, McGill University and Magdalene College, Cambridge University. Summers were spent on Long Island Sound, then on a Laurentian lake when the war came. There were summer jobs in the cornfields of Illinois, on a cargo ship to Latin America, and at La Société historique du Saguenay. His parents were American; they instilled in him their optimism and can-do mentality – to reach, to challenge, to try, and to give back. These charactersics inspired him to establish The Vimy Foundation in 2006 – with the mission of fostering pride in Canada and its coming of age and its role in the world, especially with France and the UK. He had an appreciation for design, fine workmanship, antiques, and was passionate about history. Much of his life was spent outside Canada. When living 27 years in the United Kingdom, he founded a boutique investment brokerage firm, which became a member of NASDAQ. There were many ski trips in France, Switzerland and Austria, and for a time he owned a 17th century home in Gascony, southwest France. He is survived by his wife Lise, his sons Christopher and Nicholas, his daughters Christine and Natalie, his stepson Charles and by many grandchildren, in Canada, the USA, China and France. The family wishes to thank all of his caregivers, including The Royal Victoria Hospital, The Montreal Chest Institute and the Palliative Care Unit at the Montreal General Hospital. A small family service will be held to be followed by a memorial at a later date.