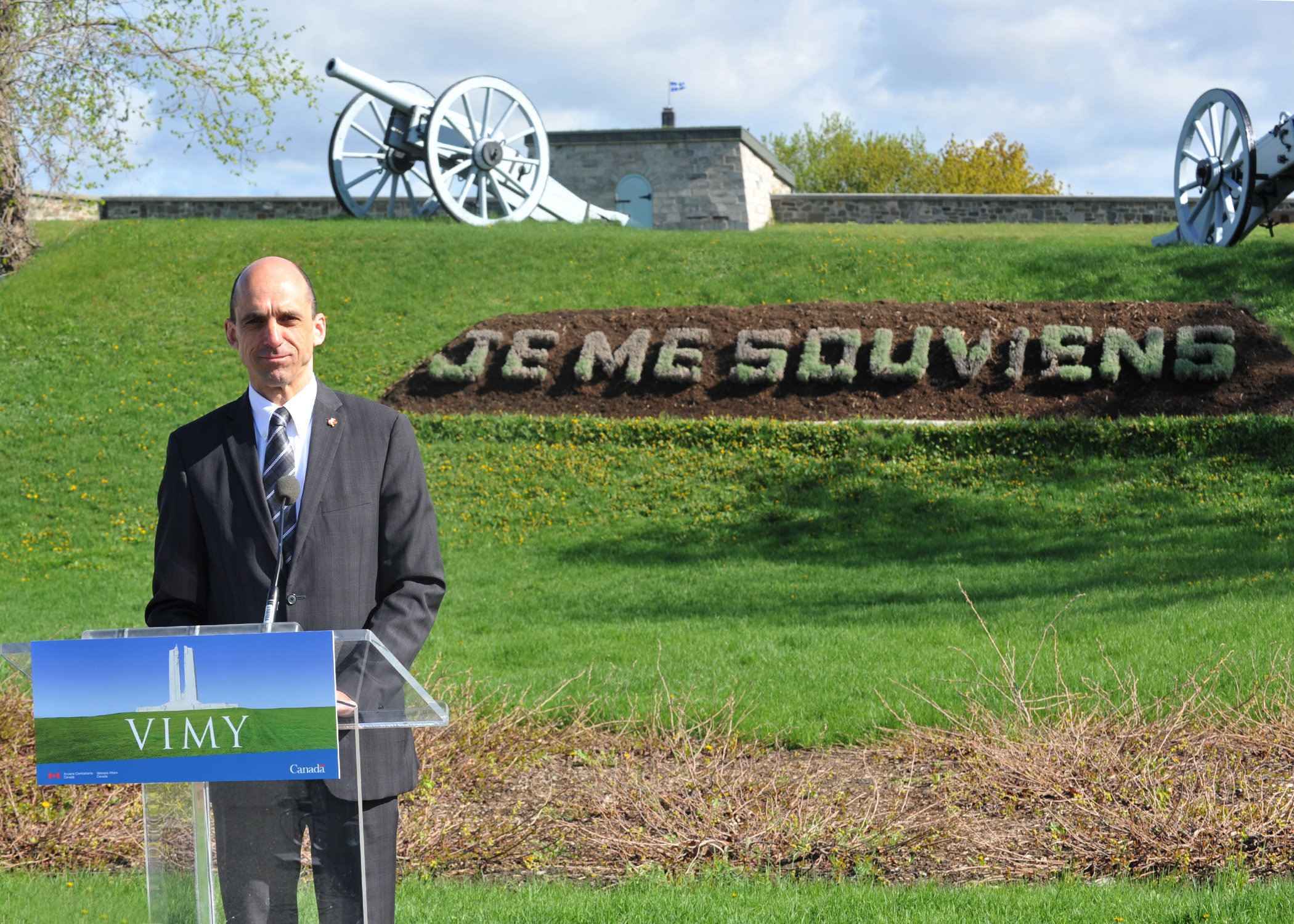 QUÉBEC CITY, MAY 14, 2013 — /CNW/ – The Honourable Steven Blaney, Minister of Veterans Affairs and Minister for La Francophonie, and the Honourable Jim Flaherty, Minister of Finance, today announced a Government of Canada investment of $5 million to support the construction of a permanent Visitor Centre at the Canadian National Vimy Memorial in France. Construction of the Centre is expected to be completed by April 2017, the 100th anniversary of the Battle of Vimy Ridge.

“The cross here at la Citadelle once stood at Vimy Ridge. This sacred emblem stands today to remind us of the price our nation paid at Vimy Ridge that Easter Monday morning 96 years ago,” said Minister Blaney. “Despite the incredible sacrifice of fellow Canadians, our nation found a stronger sense of identity and national pride. The Government of Canada is proud to be working with the Vimy Foundation to establish a permanent Visitor Centre at the Canadian National Vimy Memorial. Our mutual goal is to help strengthen that pride and to educate citizens and friends of Canada about the sacrifices and achievements of brave Canadians during the First World War.”

The construction of a permanent Visitor Centre at Vimy will be realized through financial support from the Government of Canada and the Vimy Foundation. The Vimy Foundation will raise funds through donations from the private sector and individual Canadians. The Vimy Foundation is a registered Canadian charity with the mission to preserve and promote Canada’s First World War legacy as symbolized with the victory at Vimy Ridge in April 1917.

“Through Canada’s Economic Action Plan, our Government is committed to building a lasting legacy to honour the sacrifices of Canadians who helped to shape our nation,” said Minister Flaherty, while visiting the Canadian National Vimy Memorial in France. “The construction of a permanent Visitor Centre at Vimy honours our commitment to commemorate the courage and sacrifices of Canadians in the First World War.”

“Today is a big day for all Canadians,” said Christopher Sweeney, Chair of the Vimy Foundation’s 2017 Committee. “We look forward to working with the federal government and other stakeholders, both in Canada and France, in the lead up to the centennial of Vimy Ridge in 2017. The opening of this education centre will be the highlight of national and international celebrations of what we, as Canadians, accomplished together at Vimy almost 100 years ago. Lest we forget.”

The 100th anniversary of the Battle of Vimy Ridge is part of the Road to 2017, a Government of Canada initiative that begins in 2014. The aim of the initiative is to commemorate significant milestones that helped shape Canada leading up to our nation’s 150th birthday in 2017. One of these milestones was the Canadian victory at Vimy Ridge in April 1917. The battle came at a heavy cost: 100,000 Canadians who fought there suffered approximately 11,000 casualties, nearly 3,600 of them fatal.

To learn more about the Vimy Foundation, please visit vimyfoundation.ca. For more information about the Battle of Vimy Ridge and the Canadian National Vimy Memorial, please visitveterans.gc.ca.

Image with caption: “At the Citadelle in Québec City today, Minister of Veterans Affairs Steven Blaney announced an investment of $5 million for the construction of a permanent Visitor Centre at the Canadian National Vimy Memorial in France. Here he is joined by the Honourable Gilles Lamontagne and other Veterans. (CNW Group/Veterans Affairs Canada)”. Image available at:http://photos.newswire.ca/images/download/20130514_C6725_PHOTO_EN_26698.jpg срочный займ без проверок