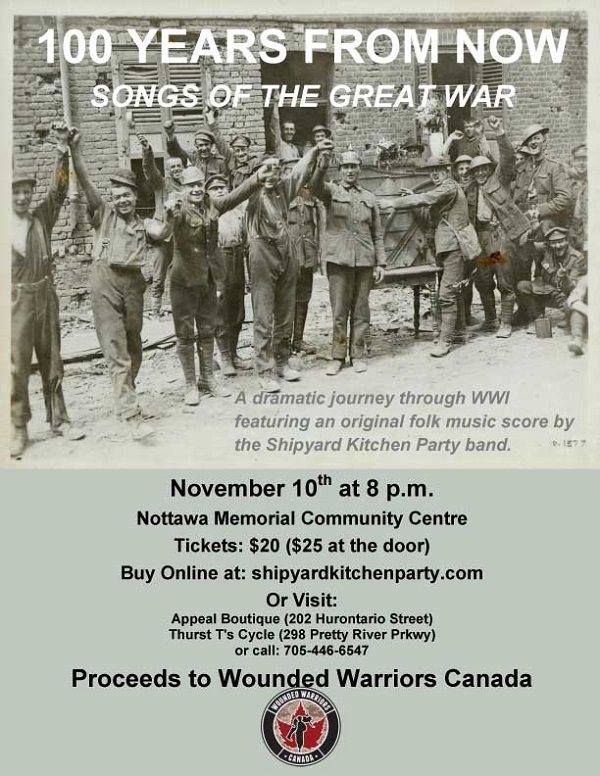 “What will they think of us?”

That’s the question asked in “100 Years from Now – Songs of the Great War” a musical journey through World War I, created and performed by Collingwood’s Shipyard Kitchen Party band.

The one-night only performance takes place on Friday, November 10th at Nottawa Memorial Community Centre , who have also offered their support to this event, with proceeds going to Wounded Warriors Canada, an organization dedicated to supporting Canada’s ill and injured armed forces members, veterans, first responders and their families.

The show combines original songs and archival photographs with the story of a fictional family that sends two sons to the western front.  A second story line traces with the relationship between iconic Canadian painter, Tom Thomson, and his love interest, Winnie Trainor. Thomson died mysteriously in Algonquin Park in 1917.

“The Canada we know today was fundamentally shaped 100 years ago by the Great War,” says director, Julie LeBlanc. “At the same time as men and women were defining it on the battlefield, a great artist was revealing it to us on canvas. This show honours both of those contributions, in support of a very worthy cause.”

Since its creation in 2006, Wounded Warriors Canada has quickly grown to be the country’s leading, wholly independent, Veteran’s charity focusing on mental health. Its programming will exceed $1.8M in 2017, funding a diverse array of initiatives, from PTSD therapy to transition and skills training.

Advance tickets for the show can be purchased online at www.facebook.com/shipyardkitchenparty, at Appeal Boutique or Thurst-T’s Cycles in Collingwood or by phoning Julie LeBlanc at 705-446-6547.