In 1919, the Memorial Cross was created to be given to the mother or widow of Canadians who had died during the war. In the years following, the Royal Canadian Legion began to annually appoint a Memorial Cross recipient who was to lay a wreath at Canada’s National War Memorial in Ottawa, on behalf of all mothers. Those chosen became known as the Silver Cross Mother. Charlotte Susan Wood became Canada’s first Silver Cross Mother in 1936 when she laid a wreath at the Tomb of the Unknown Soldier in Westminster Abbey. Seven of Mrs. Wood’s sons and stepsons served in the First World War and two had been killed in action.

At the unveiling of the Canadian National Vimy Memorial, Mrs. Wood said to King Edward VIII, “I have just been looking at the trenches and I just can’t figure out why our boys had to go through that.” The King replied, “Please God, Mrs. Wood. It shall never happen again.”

Each Tuesday, we will feature a place in Canada (or international!) with a Vimy Ridge connection. Today we highlight an international Vimy connection – in Arkansas, United States.

After the battle of Vimy Ridge, the news of the Canadian Expeditionary Force’s achievement flashed across the globe. Both in Canada and abroad, people felt compelled to honour the monumental occasion. A common gesture at the time was to re-name a community building. In Arkansas, USA, the Germania Missionary Baptist Church did just that, re-naming itself the Vimy Ridge Missionary Baptist Church in 1917. The community went even one step further, re-naming both its post office and the road upon which it was situated to “Vimy Ridge”.

Each Monday, we will share a brief biography of a soldier of the First World War with a Vimy connection. Today we honour Brigadier-Magistrate Oliver Milton Martin.

Oliver Milton Martin was a Mohawk of the Six Nations Grand River Reserve. Taking a leave from his job as a school teacher, Martin enlisted in 1916 with his two brothers. Martin was first an officer in the 114th Battalion (Haldimand), also known as “Brock’s Rangers” due to its high concentration of First Nations volunteers. In 1917, he was trained as an observer in the Royal Flying Corps and the following year qualified as a pilot.

After the war, Martin returned to teaching, while remaining in the Militia and taking command of the Haldimand Rifles in 1930. During the early years of the Second World War, Colonel Martin oversaw the training of new recruits at Niagara-on-the-Lake. Martin retired from service in 1944 with the rank of Brigadier. After the Second World War he was appointed the Provincial Magistrate in Ontario for the counties of York, Halton and Peel. As a Brigadier, Martin held the highest rank ever attained by a First Nations man in the Canadian Forces. In his honour, the East York branch of the Royal Canadian Legion is named the Brigadier O. Martin Branch.

Touring the old battlefields for Maclean’s Magazine in 1932, Bird found the scars of war remained throughout the countryside. Of Vimy, Bird wrote: “the Ridge seemed to me the most isolated ground in France… The hillside in front was scarred with white streaks – old roads and footways that time has not erased. I climbed, slipping and sliding on the wet, greasy soil… On and on and on… in and out of shell holes, skirting the bigger ones, marvelling that such conditions remained…  one sees old wire and iron stakes, battered helmets, and old mess-tin covers. Here and there a broken bayonet… Bombs of every kind” (Bird, Thirteen Years After, 107).

And still 13 years after, always more bodies of the dead. “Two boys visited Givenchy Wood last summer, and while playing there found a German and Canadian soldier lying together, their hands locked so tightly that they were buried together as they had died… One, or both, had been badly wounded, and they were trying to help each other when death overtook them. No weapons were there… They had died as comrades” (Bird, Thirteen Years After, 108). 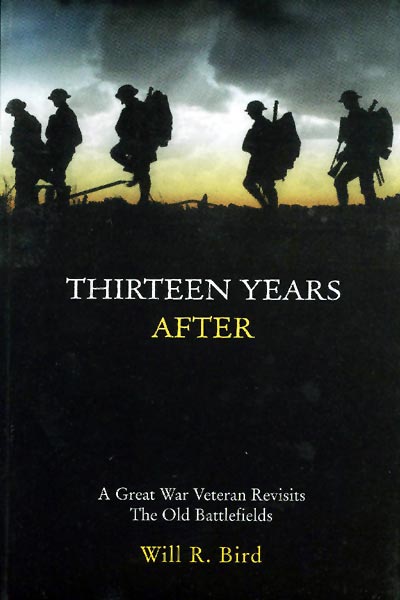 Andrew Yin travelled to Europe as part of the Vimy Foundation’s 2016 Beaverbrook Vimy Prize. Andrew’s experiences fostered an emotional connection with a Canadian soldier of 100 years ago: “I chose J.B. Hill, a First Nations man as the soldier I would commemorate.  Having not been born in Canada, I don’t have any familial connections with the soldiers who fought in the war. However, the months of researching the life of J.B. Hill connected me to his experiences.  I started to see him as a friend. Visiting the cemetery where he is buried, I felt that I was visiting an old friend. I feel sad that he sacrificed his young life, but also proud of his contributions to our nation. The process of paying tribute to him furthered my appreciation of the brave individuals who put our country before themselves, and fought for our nation’s future.”

In November 2016, the Vimy Foundation polled respondents from six Western Front nations. Asked if they were a descendant of someone who served in the First World War, (46%) of those in Great Britain, France (36%), Germany (34%), USA (31%), Belgium (30%) and Canada (29%) responded positively to having this personal connection to the war.

Do you have a personal connection? Are you a descendant of someone who served? 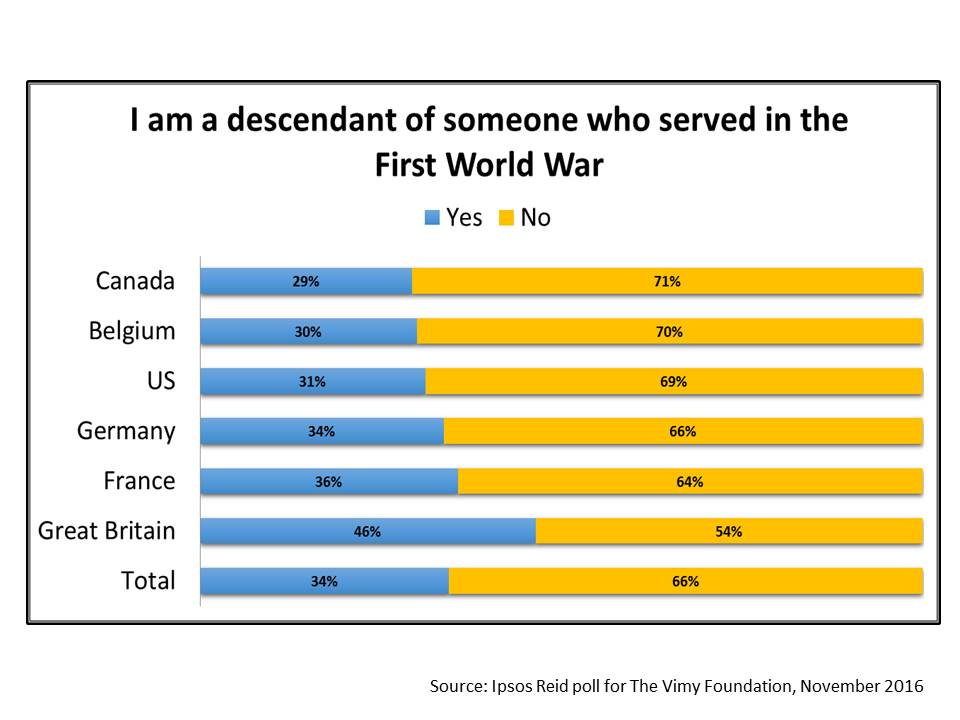 On Monday we learned about Joseph Kaeble, VC, the first French Canadian to be awarded the Victoria Cross. Kaeble was a member of the “Van Doos”. Can you tell us why the 22e Regiment is referred to as the “Van Doos”? One response from all correct answers will win a prize! This week, we give away a copy of Georges Vanier: Soldier from Dundurn Press, edited by Deborah Cowley. Georges Vanier, the Governor General of Canada from 1959 to 1967, was one of the first men to join the “Van Doos”.  His service in the First World War shaped his character, and he often described the four years spent on the battlefields of Europe as the most rewarding of his life.

Each Wednesday we will highlight the women of the First World War. Today: Grace MacPherson

At the outbreak of war in 1914, 19-year old Grace MacPherson of Vancouver wrote to both the Canadian government and the British Red Cross, indicating her intentions to help the Canadian Expeditionary Force (CEF). Her appeals for assistance rebuked, Grace paid her own way on a transatlantic voyage, landing in France, where she managed to join the Voluntary Aid Detachment. There she became an ambulance driver, tasked with transporting the wounded to safety. During the attack on Vimy Ridge in 1917, Grace drove the wounded back to field hospitals directly from the trenches.

Ironically, despite the resistance of military authorities in the early days of the war, Grace’s presence as a female ambulance driver so close to the frontlines turned her into a propaganda star. Photographs of Grace tending to her ambulance were later used to promote the roles available to women in the war effort.

Each Tuesday, we will feature a place in Canada (or international!) with a Vimy Ridge connection. Today we highlight Vimy Ridge Park, Winnipeg, Manitoba.

Recruited and mobilized in Winnipeg, the 44th Battalion (Manitoba) of the Canadian Expeditionary Force was sent to France in August 1916. Immediately after the Battle of Vimy Ridge, surviving members of the battalion erected a monument on the ridge itself in 1917. After the war, in 1924, the 44th Battalion Association and the families of fallen soldiers brought the monument to Winnipeg, where it stands today in Vimy Ridge Park.

Each Monday, we will share a brief biography of a soldier of the First World War with a Vimy connection. Today we honour Joseph Kaeble.

Joseph Kaeble, VC, MM, was born on May 5, 1892 in St. Moïse, Matane County Quebec. A mechanic in civilian life, Kaeble enlisted with the 22e Battalion (the “Van Doos” of Quebec) in 1916 and was made a machine gunner. During fighting near Mercatel, France (near Arras) on June 8, 1918, Kaeble single-handedly held off the advance of 50 Germans with his Lewis gun. Fatally wounded during this action his last words were “Keep it up boys; do not let them get through! We must stop them!”  For his actions that day, Kaeble was phosthumously awarded both the Military Medal and the Victoria Cross (VC). Joseph Kaeble, VC, MM, was the first French Canadian to be awarded the Victoria Cross, the Commonwealth’s highest medal for gallantry.

View his service files here from Library and Archives Canada.